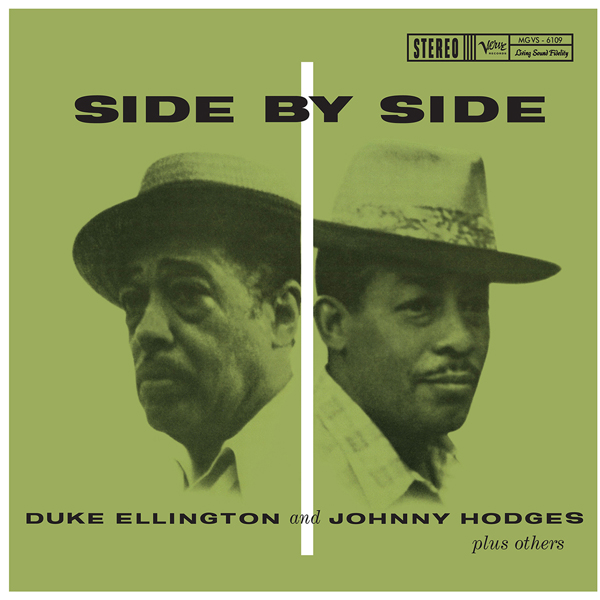 When Norman Granz signed Johnny Hodges to a recording contract in 1951, it was a prelude to Hodges' leaving the Duke Ellington orchestra to lead his own small band. Four years later Hodges was back in the Ellington fold, but he continued to record for Granz under his own name. Side By Side, recorded in 1958 and 1959, is a throwback to the small-group sessions Ellington recorded with Hodges and other members of his orchestra in the Thirties, but with a couple of important differences: the absence of Ellington himself on several cuts (with Billy Strayhorn taking over on piano), and the presence of such notable non-Ellingtonians as drummer Jo Jones and trumpeters Roy Eldridge and Harry "Sweets" Edison.

Topping off a wealth of full-band recordings, the various stars of Ellington's great outfit recorded many combo sides under their own names. And while not on the same sophisticated level of classic Ellingtonia, the late-'30s material cut by Johnny Hodges, Cootie Williams, and Rex Stewart is packed with tasty solo work and some of the finest examples of early small-group swing. These later examples from 1958-1959 feature Hodges backed by both Ellington and Billy Strayhorn on piano and such non-Duke luminaries as Ben Webster, Roy Eldridge, Harry "Sweets" Edison, and Jo Jones. Like its companion album, Back to Back, Side by Side has a loose, jam session feel, with all the soloists stretching out. Hodges is in top form throughout, while Edison and Webster man their spots just fine. Highlights include the sveltely swinging "Going Up" and Hodges' bluesy closer, "You Need to Rock." A must for fans of vintage combo swing. --Stephen Cook