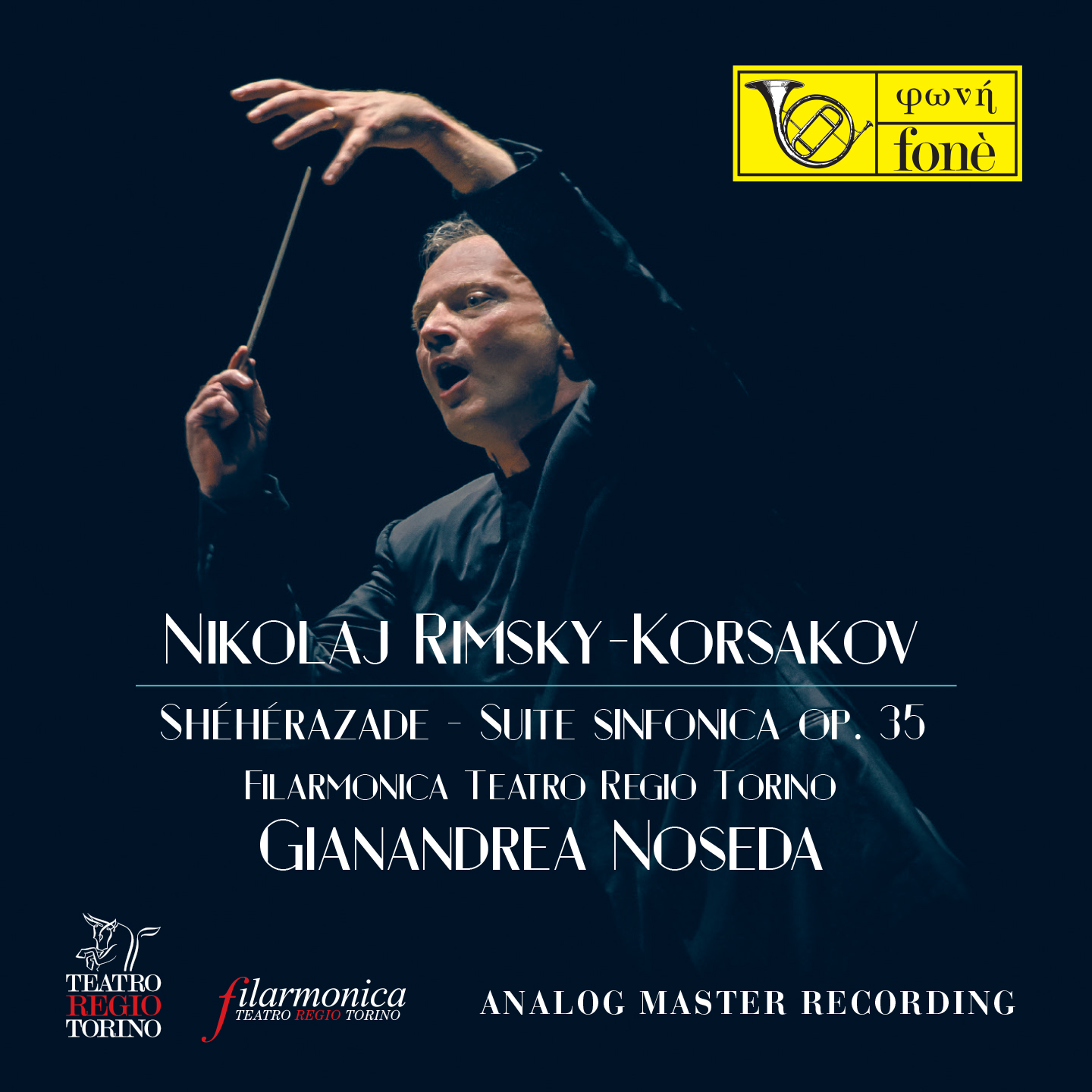 Gianandrea Noseda, Filarmonica Teatro Regio Torino – Rimsky-Korsakov: Shéhérazade, Version 2 (2015/2019) DSD64 (.dsf) 1 bit/2,8 MHz | Time – 44:30 minutes | 1,75 GB FLAC (tracks) 24-bit/96 kHz | Time – 44:30 minutes | 911 MB Studio Master, Official Digital Download | Artwork: Digital booklet Gianandrea Noseda is widely recognized as one of the Leading conductors of his generation. He is Musical America’s 2015 Conductor of the Year. On “Scheherazade” by Nikolaj Rimsky-Korsakov, Noseda proves as sensitive playwright who manages to still have energy for the next highlight in store at all dramatic outbursts of sumptuous work, and easily take back to the quiet and introspective moments sound violence and mood – and the handset so inevitably to captivate. This release (marked as Version 2) is the exact same same orchestra, same conductor, same interpretation and same location as the originally released version. The difference is that in the previous version – the recording has been made with three couples of valve microphones, all ancient and original Neumann U47, U48 and M49. This special edition has been made with only two microphones Neumann U47, capturing more acoustics of the theatre. The lush occupied Orchestra (all in triplicate occupied woodwinds, strings, twelve brass and a gigantic array on percussion instruments) have been adopted in this recording from 2015 with the Philharmonic Orchestra of the Teatro Regio Torino. Giulio Cesare Ricci took this magnificent interpretation purely analog in Teatro Regio with the unbeatable Neumann tube microphones on – no better way to hear this! A real must-have. With some characteristic leitmotifs and themes, leitmotifs treated instrumentation and an enormous sense of dramaturgy and dramatic Rimsky-Korsakov leads with more accurate narrative magic through the fairytale world of the East, can Sinbad ship gliding through stormy seas, a young prince and princess fall in love, opulent feasts in romanticized Baghdad arise in the mind’s eye – and through the four movements of the work repeatedly leads the delicate voice of the storyteller Scheherazade, represented by the cantabile solo violin. Scheherazade Imaginative orchestrator and supreme colorist, Rimsky-Korsakov, he started the symphonic suite Scheherazade in the summer of 1888, spent in the quiet of a remote village of propitious remote district of Luga, at the time when he had just completed the orchestration of Prince Igor Borodin left unfinished by his friend and colleague, who died the year before. Probably it was the seductive exoticism of that excellent score to fertilizetheatrical creativity of the Russian composer. The superb symphonic – it goes without saying – draws inspiration from the tales of the Arabian Nights penetrated in European culture long ago thanks to the fortunate French Galland, according to a taste for exoticism that went spreading exponentially in music but also in painting and more generally in the western custom of the last twenty years the 800 and the first of the new century. Gianandrea Noseda’s appointment as Music Director of the Teatro Regio Torino in 2007 ushered in a transformative era for the company: his initiatives have propelled the Teatro Regio Torino onto the global stage, where it has become one of Italy’s most important cultural exports. Under his leadership the Teatro Regio Torino has launched its first tours outside of Torino with performances in Austria, China, France, Germany, Japan and Russia. In August 2014 Gianandrea Noseda brought the Teatro Regio Torino to the Edinburgh Festival for its United Kingdom debut. In December 2014 he also led the Teatro Regio Torino in a historic first, and critically acclaimed, tour of North America with concert performances of William Tell in Chicago (Harris Theater), Toronto (Roy Thomson Hall), New York (Carnegie Hall) and Ann Arbor, Michigan (University Musical Society). A native of Milan, Maestro Noseda is Cavaliere Ufficiale al Merito della Repubblica Itali-ana, marking his contribution to the artistic life of Italy. The Filarmonica Teatro Regio Torino was founded in 2003 at the initiative of the musicians of the resident opera orchestra, which can trace its history back 275 years, through associations with such artists as Arturo Toscanini, Giacomo Puccini, Richard Strauss, Maria CaLLas, Renata Tebaldi, Giuseppe di Stefano, PLacido Domingo, and Luciano Pavarotti. As symphony orchestra it has set itself the goal of exploring the wide variety of music of the twentieth century, with a particular focus on the intersection between classical’music and newtrends,where these are not only contrasted with but enriched by each other. With a core repertoire of works by such composers as Mahler, Strauss, Ravel, Prokofiev, Berg, Copland, Respighi, and Shostakovich, the orchestra also embraces jazz, music for films, and popular music. Tracklist: 01 – Shéhérazade, Op. 35: I. The Sea and Sinbad’s Ship (Largo e maestoso – Lento – Allegro non troppo – Tranquillo) 02 – Shéhérazade, Op. 35: II. The Legend of the Kalendar Prince (Lento – Andantino – Allegro Molto – Molto Moderato – Vivace scherzando – Moderato Assai – Allegro molto ed animato – Con moto) 03 – Shéhérazade, Op. 35: III. The Young Prince and the Young Princess (Andantino quasi allegretto) 04 – Shéhérazade, Op. 35: IV. Festival at Baghdad – The Sea – Ship Breaks Against a Cliff Surmounted by a Bronze Horseman (Allegro molto – Allegro molto e frenetico – Vivo – Allegro non troppo e maestoso) / with Applause Conceived, Produced and Recorded by Giulio Cesare Ricci. Recorded on April 13, 2015 at Teatro Regio Torino, Italy. 2 x Neumann U47 valve microphones. Custom-built ‘Signoricci’ microphone preamp / mixing desk / Ampex ATR-102 running ½” tape at 30ips. The analogue master was transferred direct-to-DSD64. “In the original release I had two native masters made at the same time: one master is analogue (with which I made the Vinyl) and the other master is digital DSD 64. While for this special edition, the native recording is analogue made with the AMPEX ATR 102 1/2 inch 76 cm/sec analogue editing. The analogue master was transferred direct-to-DSD 64” –-Giulio Cesare Ricci Musicians: Filarmonica Teatro Regio Torino Sergej Galaktionov – violino (soloist) Gianandrea Noseda – conductor DSF DSD64 https://nitroflare.com/view/2FE3ECA020AC706/flac.st_GianandreaN0sedaFilarm0nicaTeatr0Regi0T0rin0RimskyK0rsak0v.SheherazadeVer.22015DSD64.part1.rar https://nitroflare.com/view/98E60A4217A5E0B/flac.st_GianandreaN0sedaFilarm0nicaTeatr0Regi0T0rin0RimskyK0rsak0v.SheherazadeVer.22015DSD64.part2.rar 24bit FLAC https://nitroflare.com/view/33E9CCBF9173462/flac.st_GianandreaN0sedaFilarm0nicaTeatr0Regi0T0rin0RimskyK0rsak0v.SheherazadeVer.22015FLAC2496.rar