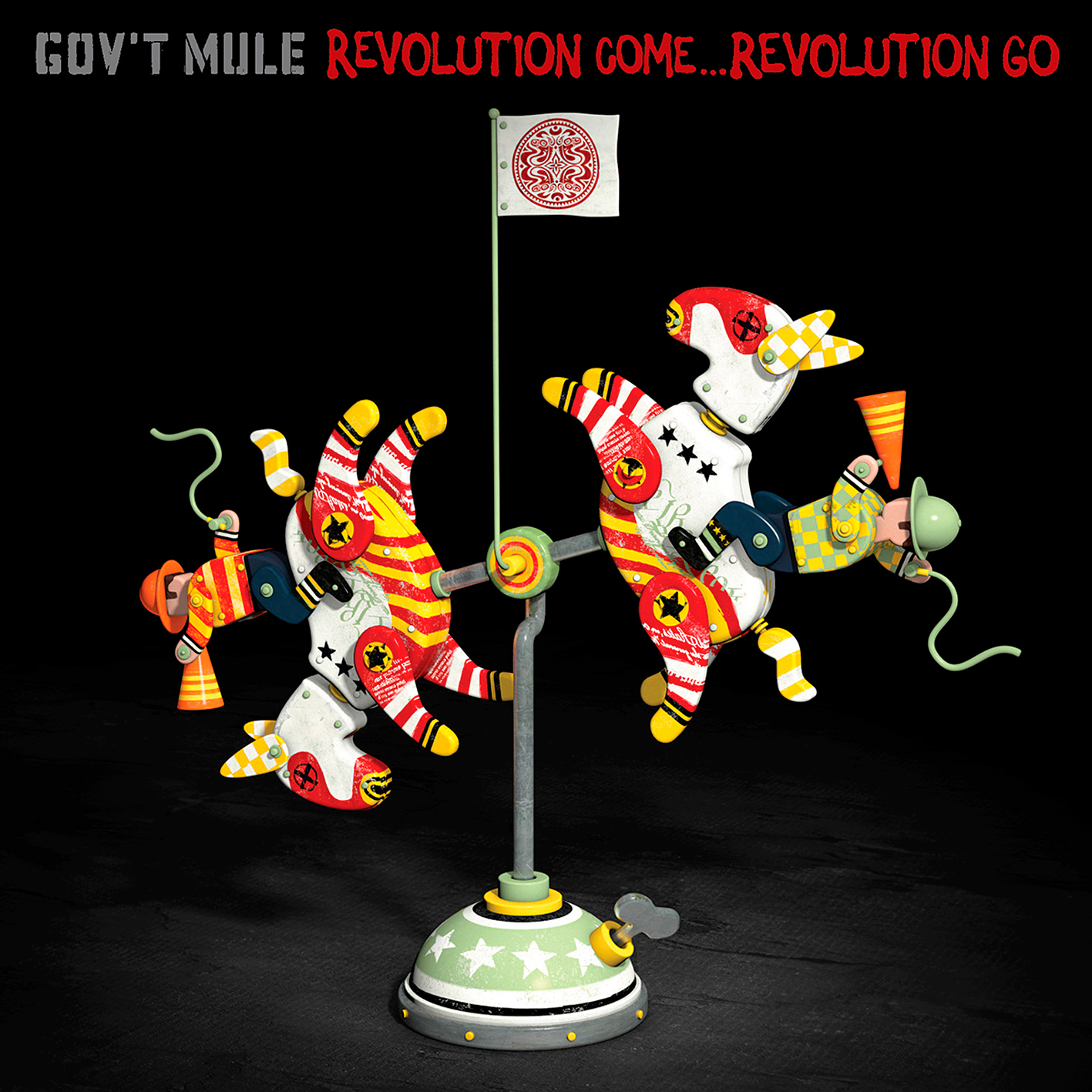 Revolution Come, Revolution Go is the latest release and Fantasy Records debut from the band fronted by one of music's most treasured storytellers and most formidable guitarists and vocalists in the modern era. Gov't Mule has showcased its virtuosity, intelligence and breadth over the course of 15 studio and live albums, millions of album and track sales and thousands of performances. The flexible interplay amongst front man Warren Haynes, drummer Matt Abts, keyboardist Danny Louis and bassist Jorgen Carlsson makes them a true living, breathing ensemble. 20 years strong, Gov't Mule's vast reservoir of songs has become a human encyclopedia of great American music while adding to that cannon with their signature sound.

In the four-year interim between Gov't Mule studio albums, guitar boss Warren Haynes has been busy: He played on the final Allman Brothers Band tour, paid tribute to Jerry Garcia with a symphony orchestra, issued an Americana-esque solo album, and played on James Cotton's Cotton Mouth Man. That said, no other music he makes resonates in the same way as what he creates with Gov't Mule (co-founder and drummer Mat Abts, keyboardist/guitarist Danny Louis, and bassist Jorgen Carlsson). Revolution Come...Revolution Go began on election night 2016. The band had their own ideas about the outcome, but as the night wore on, their worst fears came true and influenced the direction of the music here. The title doesn't pin the definition of "revolution" down to one topic, it's a verb, noun, adjective, and metaphor in Gov't Mule's dictionary; it describes everything from trends in music and social unrest to historical events and political and spiritual upheaval. The music here is heavy -- Mule heavy -- but also offers a host of other flavors and textures to expand the palette to dynamic effect. Opener "Stone Cold Rage" finds Haynes' mutating a James Gang vintage guitar vamp to suit Mule's purposes. Louis' swirling organ and Carlsson's distorted basslines are pushed forward by Abts' uncommonly funky breakbeats. The tune struts, swaggers, and pummels. "Drawn That Way" is a thundering blues-rocker that draws down on personal accountability. The musical change-ups here make this a standout. There's the slow, soulful "Pressure Under Fire" -- an exhortation to refute the mistakes of the past with collective tolerance and respect which contains an authority worthy of an Old Testament prophet. Likewise, the gospel-tinged R&B of "The Man I Want to Be," the Muscle Shoals-styled country of "Dreams & Songs," and the gritty, jazzy soul-funk of "Sarah, Surrender" offer different dimensions of the Southern-crusted rockist blues that is Gov't Mule's trademark. The latter tune contains Haynes' finest vocal performance on this or any other record he's been on, and he's assisted by the backing trio of Alecia Chakour, Jasmine Muhammad, and Bobby Allende. The abstract blues-jazz title track is bound to become a live staple for its suite-like structure. Guitarist Jimmie Vaughan lends a hand in adding earth to Haynes' fire on the psychedelic blues "Burning Point." The set closes with Carlsson's arrangement of Blind Willie Johnson's "Dark Was the Night Cold Was the Ground." It commences as a moaning drone, with slide guitar, piano, woozy bass, and rumbling drums, but erupts in a mind-melting, screaming Hendrixian blues overloaded with wah-wah and slide guitars for an apocalyptic finish. Revolution Come... Revolution Go is easily Gov't Mule's most urgent record, but their call to arms isn't preachy; instead, righteous anger is refracted through the lens of empathy. It is also a fresh reboot of the band's sound, offering excellent songwriting and arrangements; it sounds more like a group effort than anything they've released. The message is that the revolution is within you: Hear it, believe it, become it.